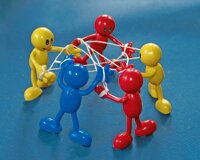 © Hofschläger/www.pixelio.de
"I feel that through ReMaT I am aware of forthcoming challenges in the future. A look ahead on advice in advance."
Nora Mzavanadze, Budapest, Hungary

"It was only during the workshop that I have realised how much research management is important. I have never had this kind of training."
Nives Skunca, PhD candidate in Zagreb, Croatia

"An insight on the world outside the ivory tower of pure research"
Benno Kreuels, PhD candidate in Hamburg, Germany

ReMaT is the product of careful assessment of the needs of early stage researchers in complementary skills training made with input from focus groups and individuals. It was developed with funding as a Specific Support Action under Framework 6 Life Sciences. During the project five pilot workshops were given and the feedback carefully assessed. The acclaim given then led to the initiative to continue to offer ReMaT as a package on a cost covering basis.

The five initial pilot workshops were hosted by

Since then ReMat has been given many more times. Demand is very high. It has also fostered a demand for courses covering each module topic in more detail which are also offered.